It is rather difficult – and probably inappropriate – to discuss the Claremorris Open Exhibition without taking into account the town of Claremorris itself. Even though it has been around for thirty-three years, it is still something of a wonder that a small town in County Mayo managed to create and maintain over the years what has become a landmark event in contemporary art in Ireland. The difficulties arising from the lack of infrastructure or the remoteness from an art market certainly speak for the commitment and perseverance of the organizers, the Claremorris Arts Committee.

The Claremorris Open Exhibition is a timely reminder of what is at stake regarding notions of public and audience. Art audiences have been at the centre of much discussion and research lately, generally as part of a strategy to justify public funding for the arts. The website Art Audience, a joint partnership of the Arts Council and Temple Bar Cultural Trust, insists on economic strategies and marketing methods to raise the numbers attending art events. That art organizations should question their relationship to the public is not to be contested, but to do so in numerical terms is.

Refreshingly, Claremorris does not place emphasis on the number of visitors, but on the quality of experience for both the public and the artists: amongst other initiatives the exhibition is accompanied by an artist in residence in charge of leading school tours, and exhibiting artists are invited to a pre-opening to meet up with the committee as well as with each other. In her catalogue comment, this year’s adjudicator Lisa Le Feuvre emphasized the honor of being chosen and the hospitality of the town. This hospitality was well reciprocated by the response of the art world – thirty out of the forty-one exhibiting artists came to the pre-opening.

In The Truth of Democracy, Jean-Luc Nancy proposes to counter the economic domination of equivalence1 – and end its inherent nihilism – with a new form of inequivalence: the affirmation of a value always unique and singular that cannot be compared nor substituted, the incommensurability of the singular experience. How can the experience of schoolchildren encountering contemporary art year after year, not in some remote city but within their everyday lives, be measured? Ultimately, what really matters is not so much that the Claremorris Open Exhibition made it as a national contemporary-art event but rather that contemporary art made it to Claremorris.

But to this year’s show: beyond the heterogeneity of an open-exhibition process and a rather literal attempt at theme grouping – on the lines of ‘fantasy’, ‘house’, ‘walk’ or ‘packaging’ – the selection is characterized by a strong painting presence and a modesty of format, which may or may not have been imposed by the exhibition spaces available, but which is quite befitting the overall unassertiveness of the artworks.

Tentative explorations are found in the elliptic gestures of Caroline Doolin’s Evidence of Absence or in the palimpsestic build-up of Antonio Julio López Castro’s painting series Shed, but it is probably in the resilient greyness of a majority of artworks that the speculative identity of the show is most apparent. Not that some vivid colours do not come through, as in the utopian visions of Cecilia Danell, the levitating objects in Anthony Collins’ Recovery Room or the installation of colour swatches on the town square by Paul Hickey, but they are few.

Grey: it is the grey of the archival prints of Sabina McMahon’s recounting of religious miracles in The Transport of the Holy House of Loreto, the grey of the large office space of Hallowed Ground in Siobhán Oglivy’s photographs, the grey of the super-8 film’s grain absorbed in the digital video transfer of Mimesis by Kitty Rogers, but perhaps most exemplarily it is the grey in the paintings. There are the threatening skies of Tony Gunning or the murky grounds of Loretto Cooney’s flooded plains. The idea of Greyness has rarely been more persuasively expressed than in Paul Klee’s writings. In his notebooks, he related grey to chaos: 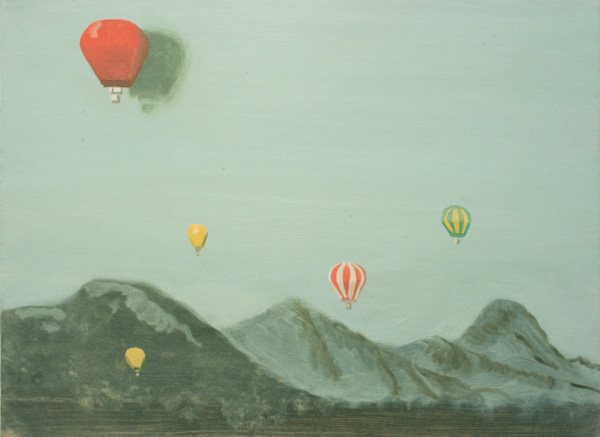 There is a sense of primal chaos being shaped through geological processes in the paintings of Kevin Mooney. Mountains emerge alongside flags, skies unfold with hot-air balloons in their midst; a surrealist geomorphism where the enduring and the accidental are weaved together in a world in perpetual re-forming. 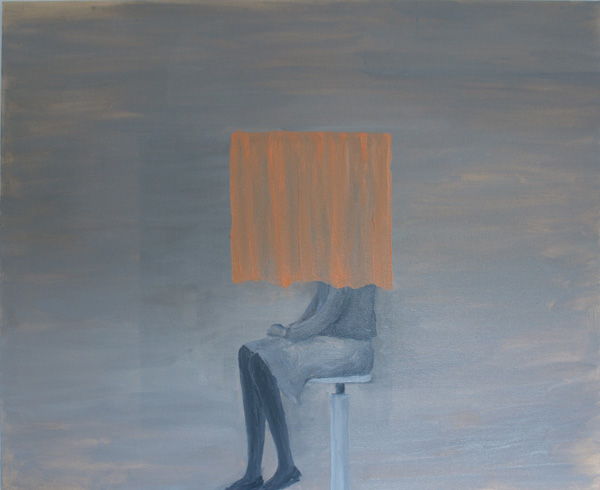 Greyness becomes its own subject in the work of award winner Fionna Murray. In the two paintings exhibited, Light Floater and Faith in a Wordless Knowledge, figure and objects hang on their teetering presence over vast unresolved grey grounds in resonance with Klee’s words of a fateful point of uncertain balance.


It is tempting to see a parallel between these works in a perpetual state of becoming and adjudicator Le Feuvre’s interest in failure (she edited a forthcoming book on the subject), which she describes as “something incomplete and open to possibilities." It is an attractive proposition and a welcome antidote to the relentless demands of a culture of achievement.

A selection of video works highlights some of the most attractive aspects of the show as well as some of the less convincing. Several works relate to the house as repository of memories such as the long tracking shot through the dilapidated house of her childhood in the video work of Margo McNulty. However well established, the genre could have done with some revisiting to reflect the current situation in which Ireland is not so much the repository of ruins of the past, but cluttered with the empty shells of a forestalled future with about six hundred redundant, brand-new housing estates.

Current issues are more directly engaged with in the documentary Disappearance of the Railway Hostel by Vukasin Nedeljkovic; it recounts through a series of interviews the impact on the population of Kiltimagh, Co. Mayo, of the opening and subsequent closing of a centre for asylum-seekers. An interesting pendant to Asylum Seekers (2007), it dwells on the experience of the hosting population rather than the asylum- seekers themselves. It is a rather straight documentary and would raise the question why it should be shown at a visual-arts event, if it wasn’t for the suspected answer that it couldn’t be shown anywhere else. 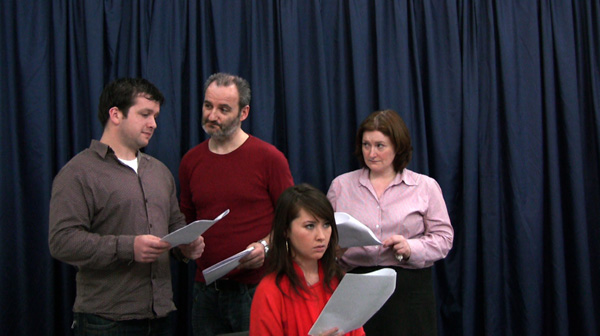 At first sight Seamus McCormack’s video Galatea looks like a remake of a James Coleman work, with four actors self-consciously delivering lines in front of a stage curtain. However, in Mc Cormack’s work the modernist detachment, which had expressionless actors in the midst of drama, is turned around. The prescriptive stage directions for the actors have become the very content of their – expressive – exchanges. Engaging and humorous, Galatea also reflects on a TV reality-show culture in which self-fulfilling fame is its own content. 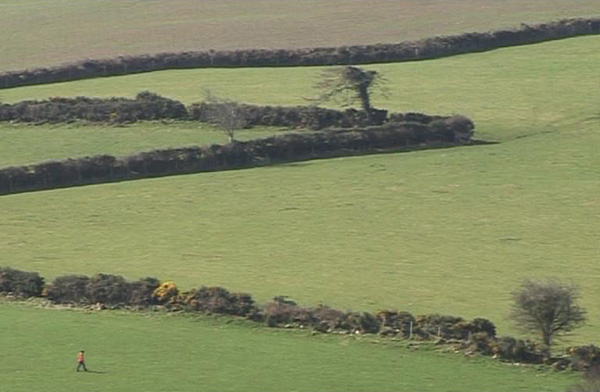 Aileen Lambert’s Boundary is another video work, but it clearly affirms its affiliation to painting and its complicated interaction with the frame. It is a single still shot of fields bordered by hedges and stonewalls. The shot is framed in such a way as to have the hedges crisscrossing over it. A solitary walker, presumably the artist, undertakes to walk along the edges of the shot’s projected rectangle, as one would tour their land. To do so, however, she has to struggle over the actual landscape boundaries as so many hurdles rising in her way. Through a simple strategy, Lambert offers a compelling image of the relationship between art and the physical world. The artist’s land is an ideal projected space, which nevertheless encompasses and negotiates its existence with the real world.

Boundary could also act as a metaphor of the connection between the Claremorris Open Exhibition and the town: through the vagaries of the location of existing galleries and disused buildings, this year’s exhibition spaces form a quasi-circle onto the map of the town centre. This projected circle, while no doubt arrived at after many arduous negotiations, temporarily forms an abstract space for art, from which the world can be viewed from a stimulating variety of perspectives. If failing at times to challenge established genres, it nevertheless re-affirms the potential emancipatory power of art and the necessity to make it accessible to all kinds of publics regardless of numbers.

1. Equivalence is what funds value in capitalism. “Capitalism is a decision of civilization: value is in equivalence" (Nancy, Vérité de la démocratie, Galilée, 2008, p. 45); it replaced distinctions or use-value. Historically democracy developed with capitalism – a parallel can be seen in the abolition of privileges – but Nancy argues that they are not necessarily bound together and that a democracy of in-equivalence can exist.