Barbara Knezevic recently exhibited at PCP as part of its summer programme of artist-initiated projects. The artist’s statement proposed an examination of the potential of materiality and objecthood, utilising various materials such as fabric, stone, magnets, weather balloons and wax. The most prominent piece in the space was suspense object, a large stone suspended by sisal string from a scaffold. To its right, on the wall, a small lambda print on diabond, entitled try to break me, depicted an anvil on a white ground. In the centre of the space, a thin hardbound book, titled imaginary objects, rested on a plinth. The end of the long narrow gallery space was filled floor to ceiling with elation / deflation object, consisting of six large helium-filled latex weather balloons, tied together and held to the floor with cotton string, elastic bands and unseen weights. 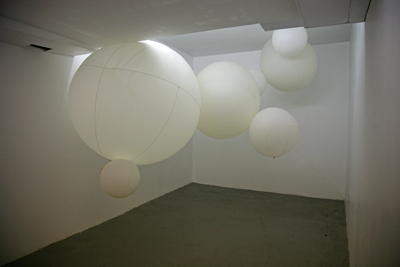 In the works exhibited, various physical forces affected the artist’s efforts. Forces of gravity were countered by sisal twine strained to the point of snapping. Balloons filled with helium gas rejected the full possibilities offered by the space. They slowly deflated over three days, by the end of the exhibition leaving a sad collection of strings sagging to the floor. Their lazy inert state was palpable in the weight of gas they could not contain despite the best efforts at testing the limits of the materials involved. These experiments demonstrated the illusion of a perfectly controlled outcome, and the instability and uncertainty underlying the processes that Knezevic had set in motion. 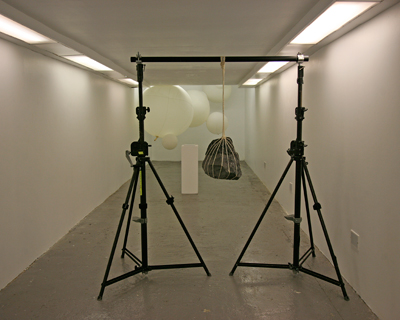 Not every piece was physically realised in the space, but rather existed by means of a depiction or image of its potential physical form. A perusal of the book demonstrated this. An elegant publication, it contained no authorial text reference, simply a short verse text and several photographs, one to a page, of a series of arbitrary sketches on coloured green and yellow post-its. These preliminary passing sketches, adhering to the photographic plane only by their adhesive strips, were like visual ideas jotted down between tasks, exploring possible outcomes of the physical works, for example suspense object. The verse text revealed the author’s intention that these were a collection of imaginary objects that have never been made, being perfect by existing only in the drawings within the book, that “can never break, fail or destruct." They also defy gravity and physics, (which they did within the photographic image), and “can be inpromptu." The sketches seemed to immortalise, and therefore protect, imagined objects from destruction and failure, as if pointing to the difficulties Knezevic envisaged in giving physical form to her ideas. 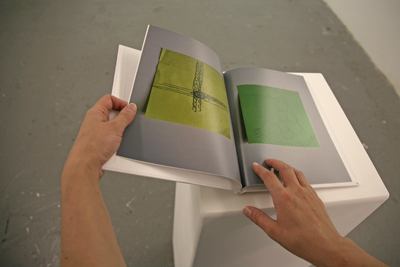 Similarly, the smallest object on display, the print try to break me, took the issue of the physical compared to the depicted to the extreme. An anvil, possibly the heaviest object on display, although physically not presented in the space, was depicted floating nonchalantly on a white field, with a text inscribed on the metal surface as if to tease the viewer – “A SAMPLE OF XX+ TRY TO BREAK ME." Clearly we couldn’t and this object was protected from the potential fate of the realised works and the forces acting upon them. It was therefore, like the book, not directly affected by the issues of materiality and objecthood that Knezevic set out to examine. Such an examination could, of course, have confined itself to a consideration of the readymade, or of natural forces acting on object-based art. However, for this author, the work also recalled the laboratory approach of Arte Povera in terms of its openness towards combinations of materials conveying a strong poetic resonance. This was especially evident in suspense object and to an extent in elation / deflation object. Rejecting the coolness of conceptual and minimalist processes, Germano Celant saw Arte Povera as a “hymn to commonplace, primary elements – to nature understood in terms of Democritean unities, and to man as a ‘physiological and mental fragment'" [1] There were similar resonances here in terms of the observation of the effects of primary natural forces on these objects. However, a physiological interpretation would point to a more fundamental, individual-centered issue at play.

A dilemma was therefore being presented here which was not answered by an exclusive concentration on the material properties of these objects, rather it appeared to arise between the potential of the objects and the risks involved for the artist. Parallel to the tensions created between gravity and the mass, air and magnetism on these objects, a greater potentiality was being explored, namely the potential to fail. Key to this was an obvious absence, that of the artist herself. The play between physical forces acting on materials and the smaller unrealised potentialities raised a performative absence. In this sense, the analogy of Arte Povera might be limiting as the concentration was wider than the materiality of the objects and the forces acting upon them. A comparison with previous performance projects by Knezevic and the strategy used in this exhibition was interesting to see – an exhalation of breath without an obvious source or outlet, and the testing of physical endurance in a corporeal vacuum. This was an elegant conceptual project which was deceptively seductive and controlled. It successfully demonstrated a central contradiction in the creative process whereby it is often necessary to bring it to the point of collapse for it to succeed.

Colm Desmond is an artist based in Dublin.