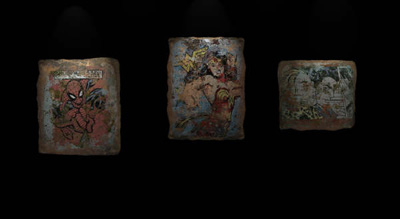 Creeping up a creaky staircase and enveloped by the historic smells that a house built in the nineteenth century exudes, I approach the latest exhibition by Angela Darby and Robert Peters.  The show, entitled The Horror room, was born out of the direct experience Darby had as a child growing up in Antrim. During the seventies, in a grassroots bid to encourage young people from both sections of the community to attend what was her local youth club, it was decided that murals of cartoon heroes should adorn the walls. However, the story of these murals doesn’t quite end there.

I reach the top of the stairs and find a small white box attached to the closed door of the exhibition room and perched at chest height. I peer into it and discover a family of miniature torches. A small hand-written note urges me to take one. 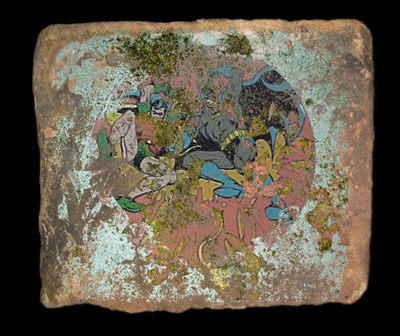 I open the heavy door and can feel the cold air gust against my body. It is pitch black, so I am forced to push the little button on the torch to enter. I am Indiana Jones. Stumbling down the corridor to the main space, I locate the first print in the collection, that of Captain America. Though he still looks like a force to be reckoned with, the paintwork depicted in the photograph has wilted and drooped. This is where the tale of these once-sprightly murals takes a turn. Like with most third-sector establishments, funding does not always flow in the direction of youth-facility maintenance.  A few years’ wear and damp soon infiltrates the colourful and perfectly proportioned characters. During this time, the youth room adorned by these wall portraits converts by day to the detention room for a local school. Through the change of use, these decorated quarters are dubbed ‘the horror room’ by the youngsters who have been detained. This tag gives instant kudos to all those young people punished in this room. 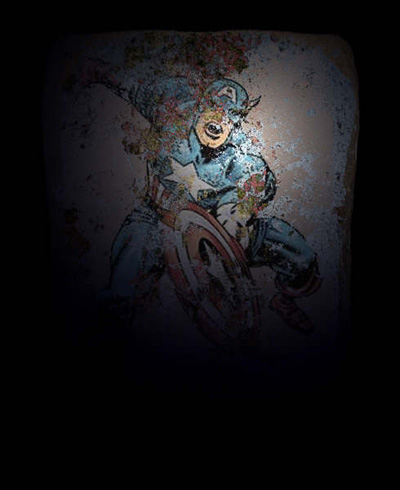 A decade or two pass with little or no repairs to the premises. A council decision is reached to condemn the building. On hearing the news, Darby journeys back to the site with her artistic companion Peters, and introduces him to an iconic treasure-trove of her past before all is destroyed, forever.

Originally, the intention of the mural images was to visually assert a neutral setting for kids. The time in question was the seventies and most murals young people would have witnessed would have been of 15ft masked men, starved men, or slightly deformed-looking loyalist commanders. The images recorded in the exhibition consist of, amongst others, Spiderman, Wonder Woman and the Batman/ Robin crusade. The murals in turn were a friendly ‘subconscious’ push to project ulterior role models for kids.

However, more striking is the effect of damp and bacteria on the murals. Northern Ireland’s renowned muggy climate has savaged the work in only a handful of years, making it resemble the wear and tear associated with a 3000-year-old archaeological find from an arid country. The resulting cracks, stains and loss of vibrant colour taint the images into ancient treasure. Is this the question Darby and Peters want you to answer?: ‘What’s the difference between ancient art you would find in an exotic and faraway cave to cultural art of the same connotation, only found in a condemned and damp, rotten youth club in Antrim?’. My personal answer of ‘not much’ derives from the thought that the artistic depiction of the ‘super hero’ for society’s deliverance/ escapism/ aspiration is temporal and a cultural constant.

Darby and Peter’s careful preparation, in order to recreate the scene they themselves first witnessed in the cold and moist chasms of a condemned building, lets us savour the sort of heritage that could never be recognised by Arts or Heritage councils. I delight in their decision to use Space Delawab to hold the exhibition, a mere enclosed room in a shared Victorian house. Darby and Peters painted the room black, turned off the heating and shut out any visible light entering the room. An eerie history of its own seems to leak out of its walls and floorboards, all intensifying the experience for the viewer. 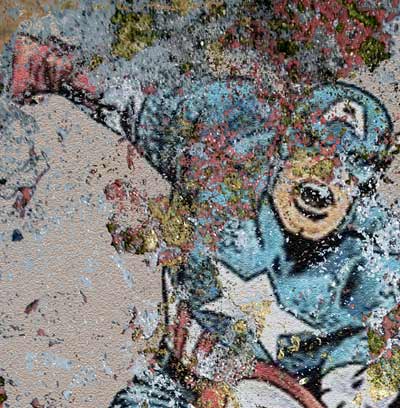 Along with their previous work Public address: the people’s wall, Darby and Peters yet again document another cultural practice that crosses Northern Ireland’s own cultural divide. However, rather than highlighting viral spreads of cultural ideas, efforts are this time concentrated on inspiring the viewer to seek out such cultural heritage in the most nondescript of places where they themselves may abide. By catapulting the viewer into the role of a twenty-first-century-popular culture archaeologist, they have handed over their own torch so we may go forth and begin to identify our unnoticed and often forgotten heritage.

Natalie Irvine works in community development and also runs her own social enterprise; trained as a journalist in London and inspired by art’s cultural references upon society, she likes to combine the two.