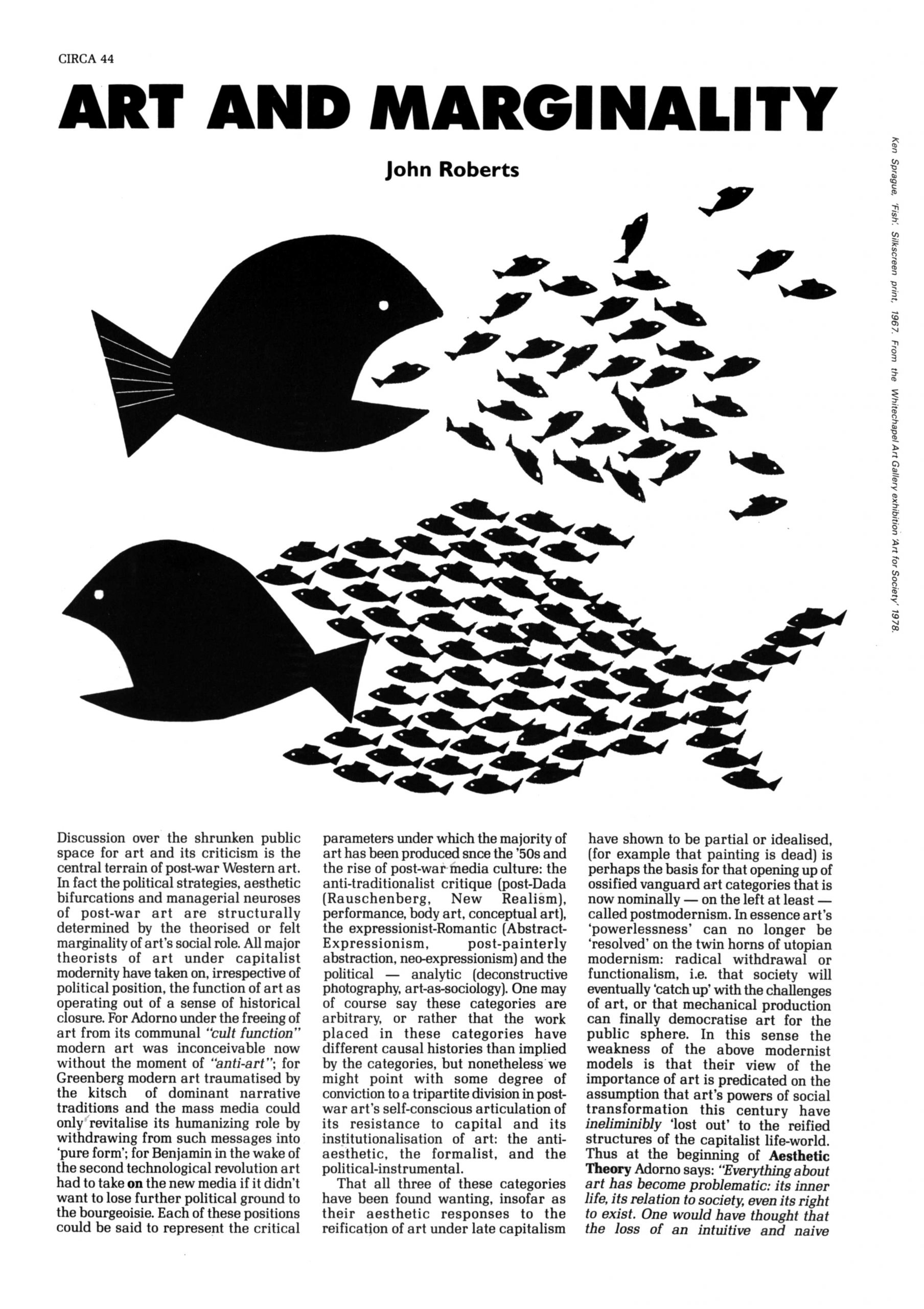 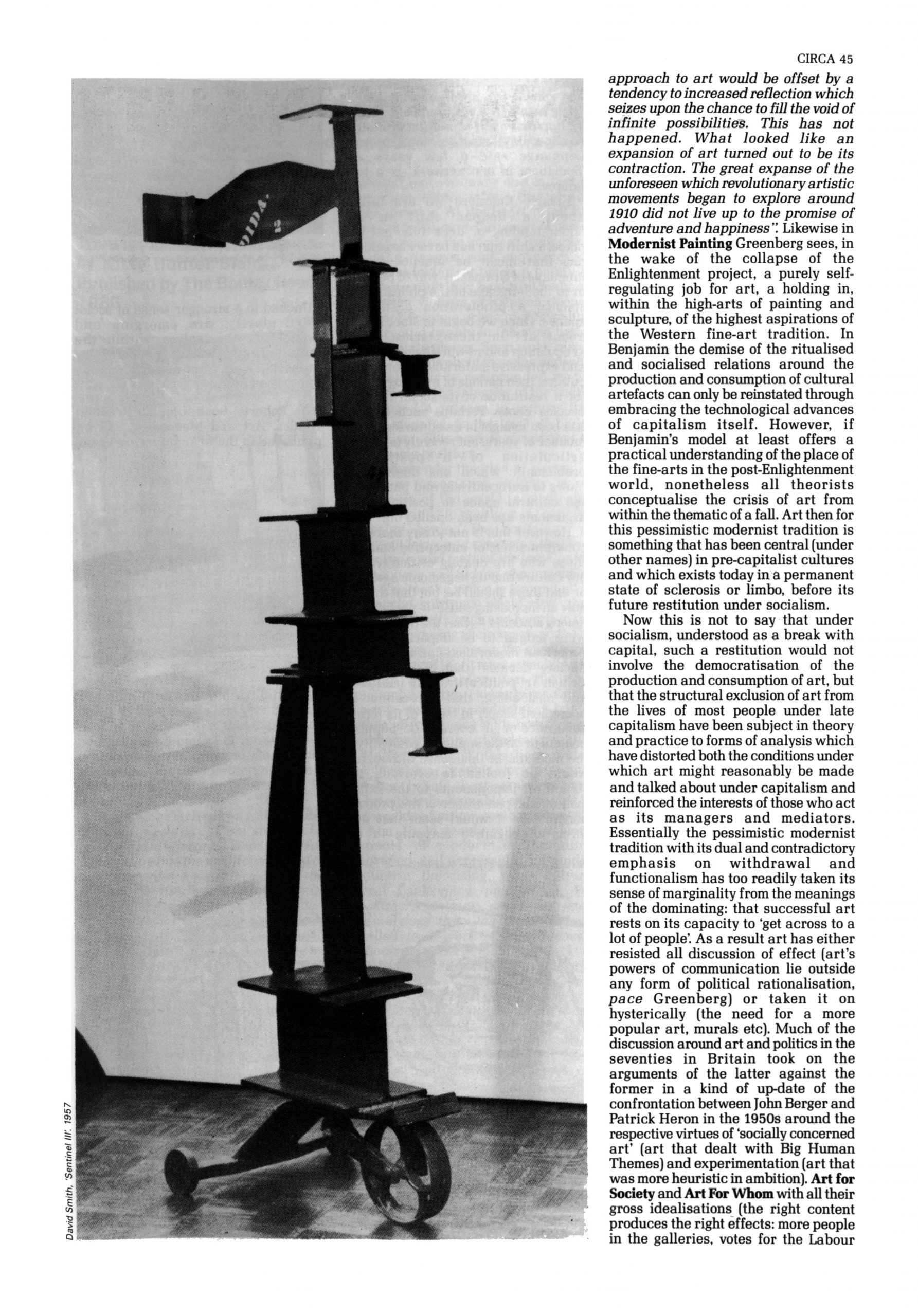 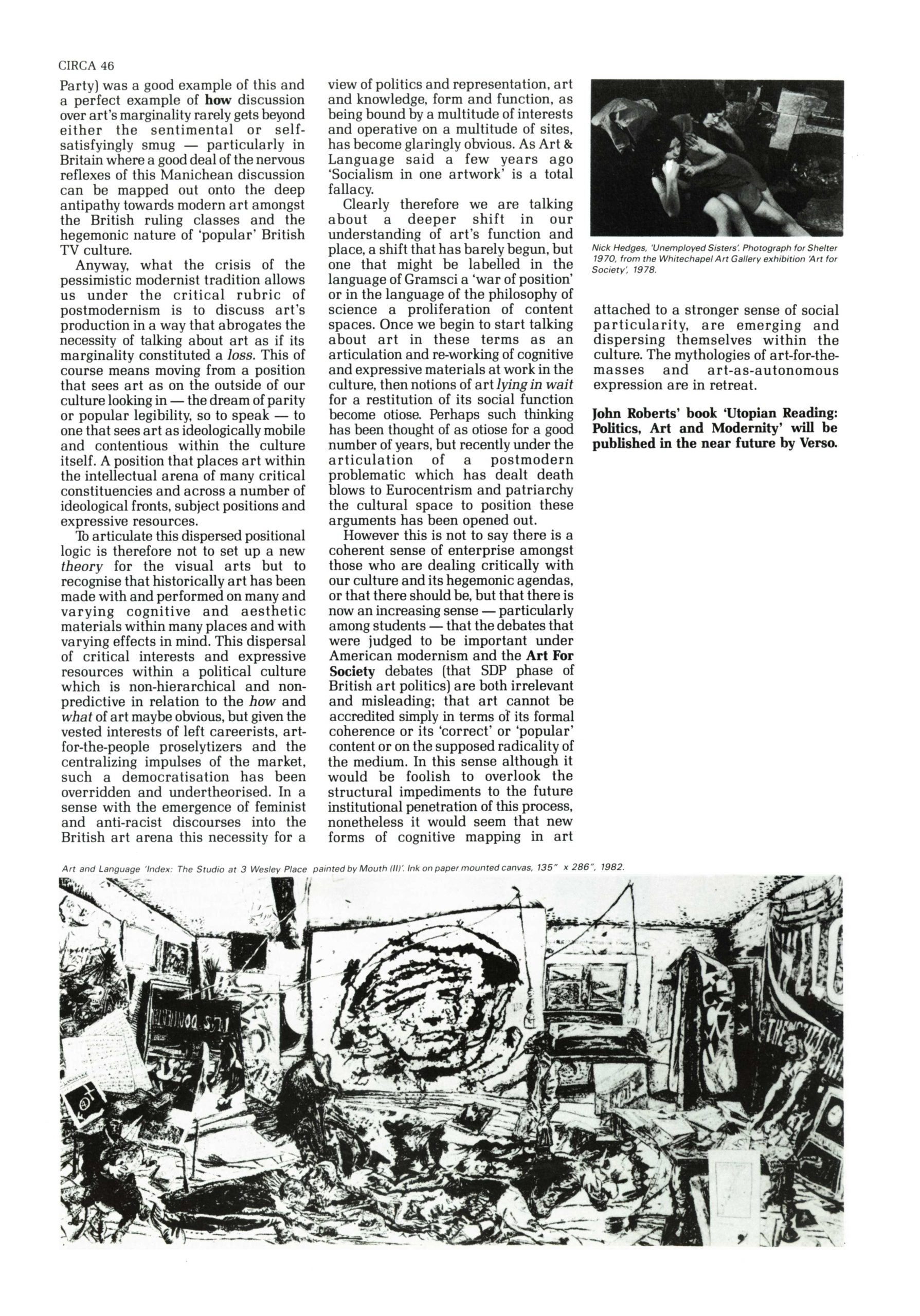 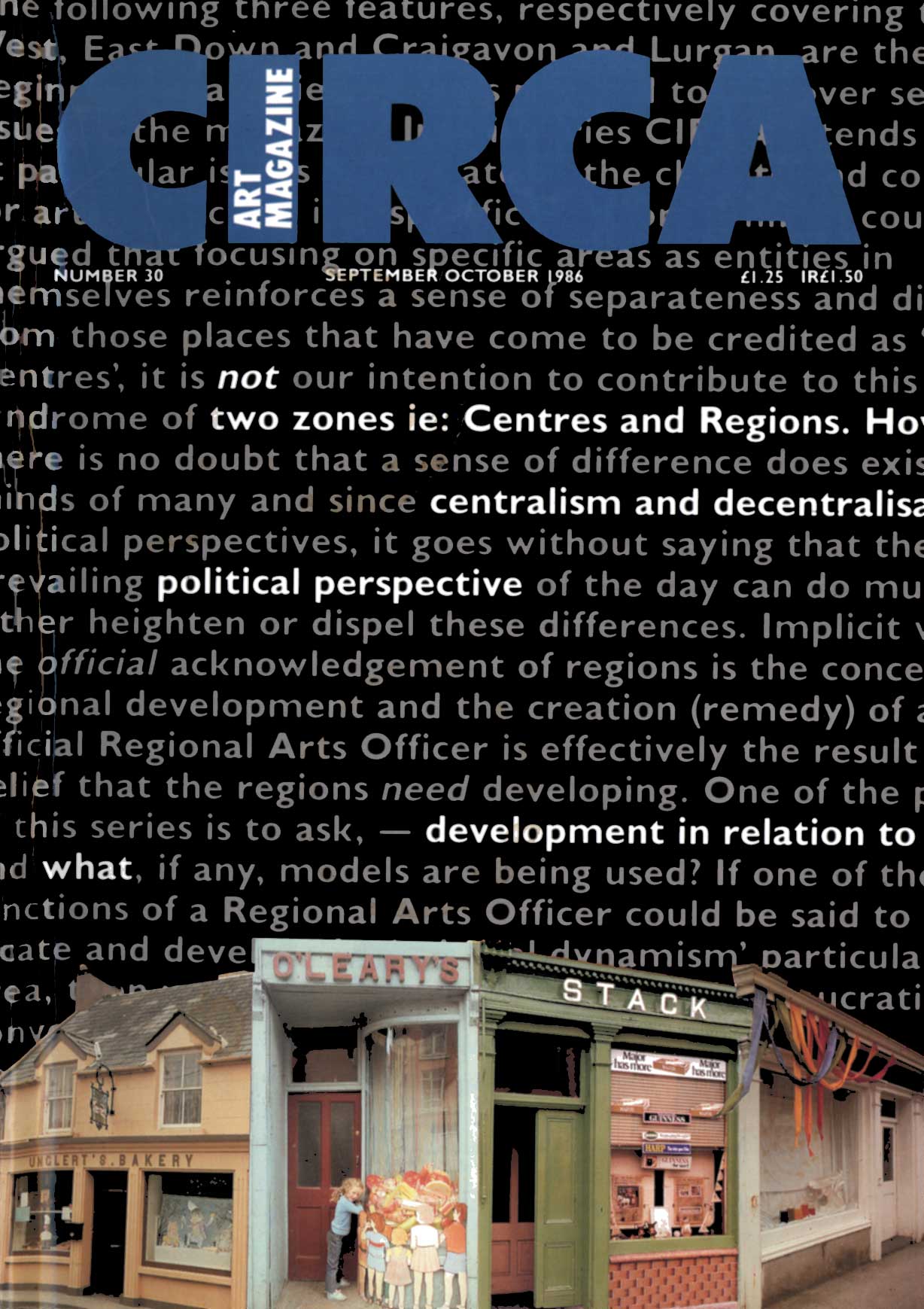 Discussion over the shrunken public space for art and its criticism is the central terrain of post-war Western art. In fact the political strategies, aesthetic bifurcations and managerial neuroses of post-war art are structurally determined by the theorised or felt marginality of art’s social role. All major theorists of art under capitalist modernity have taken on, irrespective of political position, the function of art as operating out of a sense of historical closure. For Adorno under the freeing of art from its communal “cult function” modern art was inconceivable now without the moment of “anti-art”; for Greenberg modern art traumatised by the kitsch of dominant narrative traditions and the mass media could only revitalise its humanizing role by withdrawing from such messages into ‘pure form’; for Benjamin in the wake of the second technological revolution art had to take on the new media if it didn’t want to lose further political ground to the bourgeoisie. Each of these positions could be said to represent the critical parameters under which the majority of art has been produced since the ’50s and the rise of post-war media culture: the anti-traditionalist critique (post-Dada (Rauschenberg, New Realism), performance, body art, conceptual art), the expressionist-Romantic (Abstract-Expressionism, post-painterly abstraction, neo-expressionism) and the political – analytic (deconstructive photography, art-as-sociology). One may of course say these categories are arbitrary, or rather that the work placed in these categories have different causal histories than implied by the categories, but nonetheless we might point with some degree of conviction to a tripartite division in post­war art’s self-conscious articulation of its resistance to capital and its institutionalisation of art: the anti-aesthetic, the formalist, and the political-instrumental.

That all three of these categories have been found wanting, insofar as their aesthetic responses to the reification of art under late capitalism have shown to be partial or idealised, (for example that painting is dead) is perhaps the basis for that opening up of ossified vanguard art categories that is now nominally – on the left at least – called postmodernism. In essence art’s ‘powerlessness’ can no longer be ‘resolved’ on the twin horns of utopian modernism: radical withdrawal or functionalism, i.e. that society will eventually ‘catch up’ with the challenges of art, or that mechanical production can finally democratise art for the public sphere. In this sense the weakness of the above modernist models is that their view of the importance of art is predicated on the assumption that art’s powers of social transformation this century have ineliminbly ‘lost out’ to the reified structures of the capitalist life-world. Thus at the beginning of Aesthetic Theory Adorno says: “Everything about art has become problematic: its inner life, its relation to society, even its right to exist. One would have thought that the loss of an intuitive and naïve approach to art would be offset by a tendency to increased reflection which seizes upon the chance to fill the void of infinite possibilities. This has not happened. What looked like an expansion of art turned out to be its contraction. The great expanse of the unforeseen which revolutionary artistic movements began to explore around 1910 did not live up to the promise of adventure and happiness”. Likewise in Modernist Painting Greenberg sees, in the wake of the collapse of the Enlightenment project, a purely self-regulating job for art, a holding in, within the high-arts of painting and sculpture, of the highest aspirations of the Western fine-art tradition. In Benjamin the demise of the ritualised and socialised relations around the production and consumption of cultural artefacts can only be reinstated through embracing the technological advances of capitalism itself. However, if Benjamin’s model at least offers a practical understanding of the place of the fine-arts in the post-Enlightenment world, nonetheless all theorists conceptualise the crisis of art from within the thematic of a fall. Art then for this pessimistic modernist tradition is something that has been central (under other names) in pre-capitalist cultures and which exists today in a permanent state of sclerosis or limbo, before its future restitution under socialism.

Now this is not to say that under socialism, understood as a break with capital, such a restitution would not involve the democratisation of the production and consumption of art, but that the structural exclusion of art from the lives of most people under late capitalism have been subject in theory and practice to forms of analysis which have distorted both the conditions under which art might reasonably be made and talked about under capitalism and reinforced the interests of those who act as its managers and mediators. Essentially the pessimistic modernist tradition with its dual and contradictory emphasis on withdrawal and functionalism has too readily taken its sense of marginality from the meanings of the dominating: that successful art rests on its capacity to ‘get across to a lot of people’. As a result art has either resisted all discussion of effect (art’s powers of communication lie outside any form of political rationalisation, pace Greenberg) or taken it on hysterically (the need for a more popular art, murals etc). Much of the discussion around art and politics in the seventies in Britain took on the arguments of the latter against the former in a kind of up-date of the confrontation between John Berger and Patrick Heron in the 1950s around the respective virtues of ‘socially concerned art’ (art that dealt with Big Human Themes) and experimentation (art that was more heuristic in ambition). Art for Society and Art for Whom with all their gross idealisations (the right content produces the right effects: more people in the galleries, votes for the Labour Party) was a good example of this and a perfect example of how discussion over art’s marginality rarely gets beyond either the sentimental or self-satisfyingly smug – particularly in Britain where a good deal of the nervous reflexes of this Manichean discussion can be mapped out onto the deep antipathy towards modern art amongst the British ruling classes and the hegemonic nature of ‘popular’ British TV culture.

Anyway, what the crisis of the pessimistic modernist tradition allows us under the critical rubric of postmodernism is to discuss art’s production in a way that abrogates the necessity of talking about art as if its marginality constituted a loss. This of course means moving from a position that sees art as on the outside of our culture looking in – the dream of parity or popular legibility, so to speak – to one that sees art as ideologically mobile and contentious within the culture itself. A position that places art within the intellectual arena of many critical constituencies and across a number of ideological fronts, subject positions and expressive resources.

To articulate this dispersed positional logic is therefore not to set up a new theory for the visual arts but to recognise that historically art has been made with and performed on many and varying cognitive and aesthetic materials within many places and with varying effects in mind. This dispersal of critical interests and expressive resources within a political culture which is non-hierarchical and non-predictive in relation to the how and what of art maybe obvious, but given the vested interests of left careerists, art­-for-the-people proselytizers and the centralizing impulses of the market, such a democratisation has been overridden and undertheorised. In a sense with the emergence of feminist and anti-racist discourses into the British art arena this necessity for a view of politics and representation, art and knowledge, form and function, as being bound by a multitude of interests and operative on a multitude of sites, has become glaringly obvious. As Art & Language said a few years ago ‘Socialism in one artwork’ is a total fallacy.

Clearly therefore we are talking about a deeper shift in our understanding of art’s function and place, a shift that has barely begun, but one that might be labelled in the language of Gramsci a ‘war of position’ or in the language of the philosophy of science a proliferation of content spaces. Once we begin to start talking about art in these terms as an articulation and re-working of cognitive and expressive materials at work in the culture, then notions of art lying in wait for a restitution of its social function become otiose. Perhaps such thinking has been thought of as otiose for a good number of years, but recently under the articulation of a postmodern problematic which has dealt death blows to Eurocentrism and patriarchy the cultural space to position these arguments has been opened out.

However this is not to say there is a coherent sense of enterprise amongst those who are dealing critically with our culture and its hegemonic agendas, or that there should be, but that there is now an increasing sense – particularly among students – that the debates that were judged to be important under American modernism and the Art For Society debates (that SDP phase of British art politics) are both irrelevant and misleading; that art cannot be accredited simply in terms of its formal coherence or its ‘correct’ or ‘popular’ content or on the supposed radicality of the medium. In this sense although it would be foolish to overlook the structural impediments to the future institutional penetration of this process, nonetheless it would seem that new forms of cognitive mapping in art attached to a stronger sense of social particularity, are emerging and dispersing themselves within the culture. The mythologies of art-for-the-­masses and art-as-autonomous expression are in retreat.

John Roberts’ book ‘Utopian Reading: Politics, Art and Modernity’ will be published in the near future by Verso.