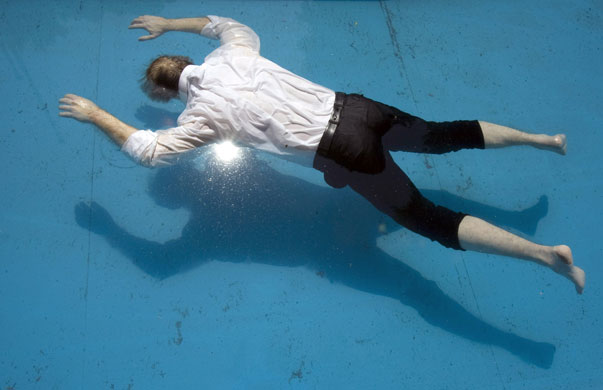 In the July 2009 issue of Art Monthly, I have reviewed Australia’s presentation at this year’s Venice Biennale. In writing the review I mentioned the Irish pavilion and the collaboration Kennedy Browne. [1] In their work, Kennedy Browne have taken an English-language presentation by Milton Friedman and used Google to translate the original through 41 different languages, before translating it back into English. The result is that a monologue about globalization, using a pencil as an example, becomes a strange discourse on the death penalty. This work relates to Huang Xiaopeng’s work where his “…video soundtracks feature pop songs translated from English to Chinese and back again through machine translation…The process shows up not only distorted representation, slipshod translation, flat mistranslation but also ‘creative translation’ – ‘out of sync’ rendition that spawns new insight…” [2]

Inspired by these artists, I have put the Art Monthly review through a Google translation package. On its journey it passed through 40 languages before finally being put through a special French cinema translation and then finally I converted back into English. Please enjoy.

Is that your dog? – Scream pain in uncertain time

The mission began when handed a French letter at opening door to Venice Biennale. This letter gives me ticket to 17th Sydney Biennale, next exciting arret on never-ending story of Kunst in grandest stadium. I wait for gate to open, I read about chancy gardener, David Elliott and how 17th Sydney Double is titled “belle of distance – chants of survival when old.” Idea of promoting more than advances a clever tie up, especially as it is a long way from European money disaster. So as Italian door stoppers begin selling people for profit, I ask woman sitting on me; does your dog bite?”

As I stroke bitch, she bites me. “You say your bitch non bite.”

“Monsieur, you are not my bitch.”

Cleverness of this thinking promotes love of double.

“Who we after?” demands Mad Mini Mix.

“Monsieur, you must go to the ospital.”

“But Mademoiselle, I be on bicycle to report experiences to Art Menstrual, editor will not wait.”

“Monsieur, you are not, you are, you’re not famous Art critic Monsieur Jean Kellouseau.”

“Mademoiselle, it is far too dangerous a peregrination.”

“Ooh Monsieur, let me come on mission of dangerousness.”

“What is your name, kitten?”

Jean Kellouseau limped past Nordic house, Brigitte noticed drawing of David, but with a rather large difference. “For your eyes not, mon enfant.”

“But Jean, this is Art and I am ready for bigger experiences, share it with me.”

“You crush your bosom too close as force of your assistance is pressed upon me.” In Creative Austrian pavilion, screens changed from being alert to being alarmed and full surveillance of Giardani was ordered. No sooner had alarm settings been raised, face recognition software spotted Kellouseau inside Nordic pavilion.

“Gander, he is in Norway,” cried the Commissioner.

Gander slipped onto velo and roared up hill past Maison French, turning right at Germania before barreling down to Norway in a matter of seconds. At that moment Kellouseau was studying the framed men’s swimming apparel thinking this might be a clue as Brigitte showered under the three trees in bathroom at centre of exhibit. She smiled at glaring crowd. Kellouseau pondered meaning of and relationship between male swimwear and sunken bed. Surveying the monitors the Commissioner ordered a strike.

“Get him with the boomerang.”

Gander’s hand sweated on stainless steel as his target finally came into view. Moving forward he removed his shoes and stood like a collector, looking incognito amongst an arty crowd. Finally he had a clear shot.  The boomerang flew accurately curling in arc en ciel through open port towards Kellouseau. At that moment Bridgette, wearing a towel to protect  modesty, threw herself at the critic who fell into sunken bed as boomerang passed perilously over the critic’s skull before returning catching Gander by surprise. He ended up face down, dead in the pool, by his own hand as a crowd gathered their approval. “Brigitte, this is no place for such an amorous rendezvous, we must push up. Come dear, it is nearing 11 and the  ‘gateaux dance’ is about to begin in Tasmania.” As the two entered Tasmania, Kitty Kat of KAOS (Kulture and Over Sexed Art) met them with stony silence.

“Careful, little lamington, this could be a honey trap,” Kellouseau whispered. As four beautiful models moved cake around the sugary Barrier Reef, Kitty Kat nodded her approval for a gateaux strike.

Kellouseau saw it but could not believe it. He whispered to Brigitte. “Do not be alarmed but a ‘bum’ is in the Great Barrier Reef.”
“Oh no, Jean, a bomb?”
“No, not a bomb, a bum.”
Brigitte saw it, a beautifully shaped bum at one end of the installation. “Ooh Jean, you are so observant.”

Kellouseau saw more sugary genitalia and realization struck him. “Ah, it is OK, dear, I forget we are in Italia and representations of genitalia, no problem, excuse um moi.”

With his critical eye attached to the scantily clad gateaux girls a number of male phallic organs came under influence of this sugar-scented dance. Offering cake to Kellouseau, a beautiful girl knew one bite was instant death. Kellouseau had Italian yellow cake for breakfast so he gave it to the starving artist standing next to him and taking Brigitte’s arm left. They did not see the artist fall into the sugary reef as dead as a painting but with an enormous erection. Curator Fifi look at Kitty Kat in horror. “What should we do?” Kitty Kat took one look at him and ordered artist to be covered in sugar until his erection became unified.

Brigitte and Kellouseau entered the room with the grandest monolith ever exhibited in Venice.

“To untrained eyes, it is a monolith, but I can see it is obviously a compilation of every video piece ever exhibited at Venice. It is a monument to the disco!”

Brigitte pushed close to Kellouseau, who put his armistice against the moment. As he did he could have realized the deadly assassin Mad Mini Max and Kitty Kat were at that time on the other side of tour de force. As Kellouseau added up his weight against tower of disco Art, it collapsed on two assassins who could not have realized that 197 thousand tapes added up to entire length of their two lives that at that moment had just ended with only a foot appearing from the rubble.

“I fear a gronde plan is a foot,” cried Kellouseau. “Come, we must return to the main Austrian tee Pee before Commissioner’s plan is hatched.”

They stealthily entered pavilion whilst speeches made people dormit. Clambering inside they heard door snap shut and the bolt clangingly closed. “Ooh Jean, are we trapped?”

“Ooh Jean, you are clever and wonderful. Make love to me.”

Brigitte stared as the helmet emerged, serpent like, from window. She could hold back no longer and pushed her man to floor position. As she did helmeted male stood tall and erect on burning desert of desire. Brigitte lowered herself down on critic. A great wet gush of rain moved across the pink horizon above.

“But Jean, the evil Commissioner.”

“A plan, little flower pot.” Jean rushed to the lower exit as the other doors flung open. Brigitte clung to the critic.

“Jean, we will be discovered.”

“Only if we picnic.”

They slipped out the back door as the crowd entered through the front. They crawled along Mundi Mundi and climbed into the Interceptor parked conveniently only a few feet away and whose tinted windows provided camouflage.

“Ooh Jean, you are so clever we will live happily ever after. Will you make love in this stimulator?”

“I am not so sure, for it is a prop forward. It is not real. It is a simulacra”

“Wait here and be ready, I will return with motorized velo.”

“Kellouseau made his exit to a surprised crowd that were now entering Austrian Pavlova. The crowd clapped thinking the Nordic house-keeper had escaped! Kellouseau ran to where a motorbike protruded. Grabbing handlebars he shook it free from its attachment and kicked it into life. The naked art critic roared up to the beautiful Brigitte who clambered outback. The Commissioner yelled after them – “you will not get away with this, Kellouseau, The Giardini is surrounded, you will never escape.”

Jean and Brigitte tried every exit but each was blocked by Italian’s people stoppers.

“Oh Jean, you are not thinking what I think your thanking – we will surely die hard II.”

“Yes, little pappillion, we may die hard III, but it is our only hope.”

Kellouseau revved the bike, screeching past the line of people waiting for British Pavlova, they scattered as they took into air and through the open doors. Inside, the crowd settled to watch Steve McQueen’s film when Evil Kneivel flew overhead and out the far side disappearing into a camel. The audience stood and applauded in thunderous approval at this cinematic reference that defied post-colonial understanding.

Running the Commissioner saw over the balcony. On Creative Australian Gonorrhea was a large cube of straw. On which two lovers had landed and now lay entwined in most amorous of straw entanglements. As Gondala made its way up the Grande Carnal, the Commisioner shook his fist, “I’ll get you, Kellouseau, if it is last thing I do.” Kellouseau turned to Brigitte. “I’m afraid, this is a slow boat to the Sydney Biennale…” Before he could finish Brigitte sucked his lipstick.

His eye twitching uncontrollably, the commissioner looked at the men in white coats. “I would have gotten away with it if it was not for those meddling kids.”

In this episode Monsieur Jean Kellousou was played by John Kelly and Brigitte was played by Christina Todesco-Kelly. See www.johnkellyartist.com