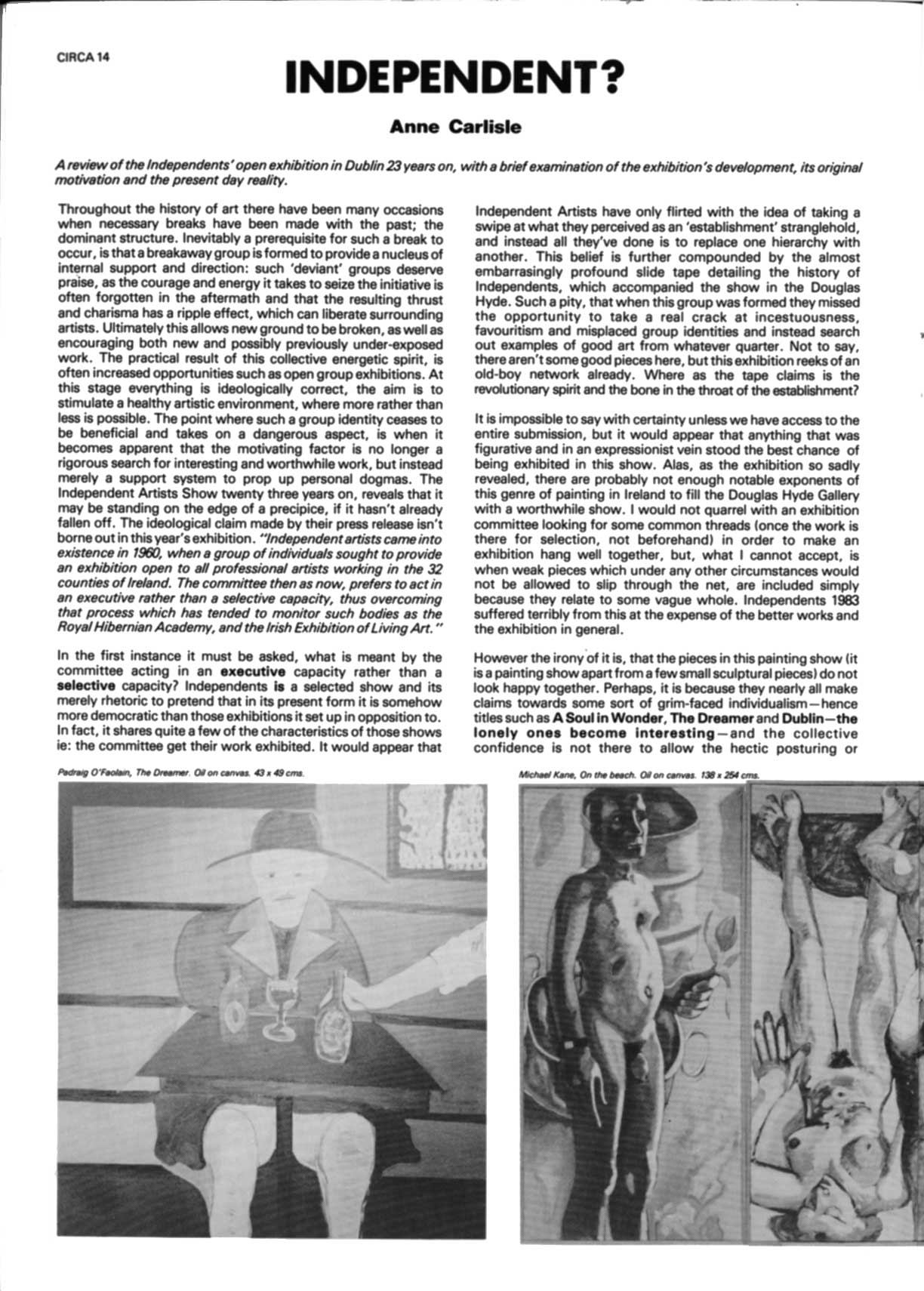 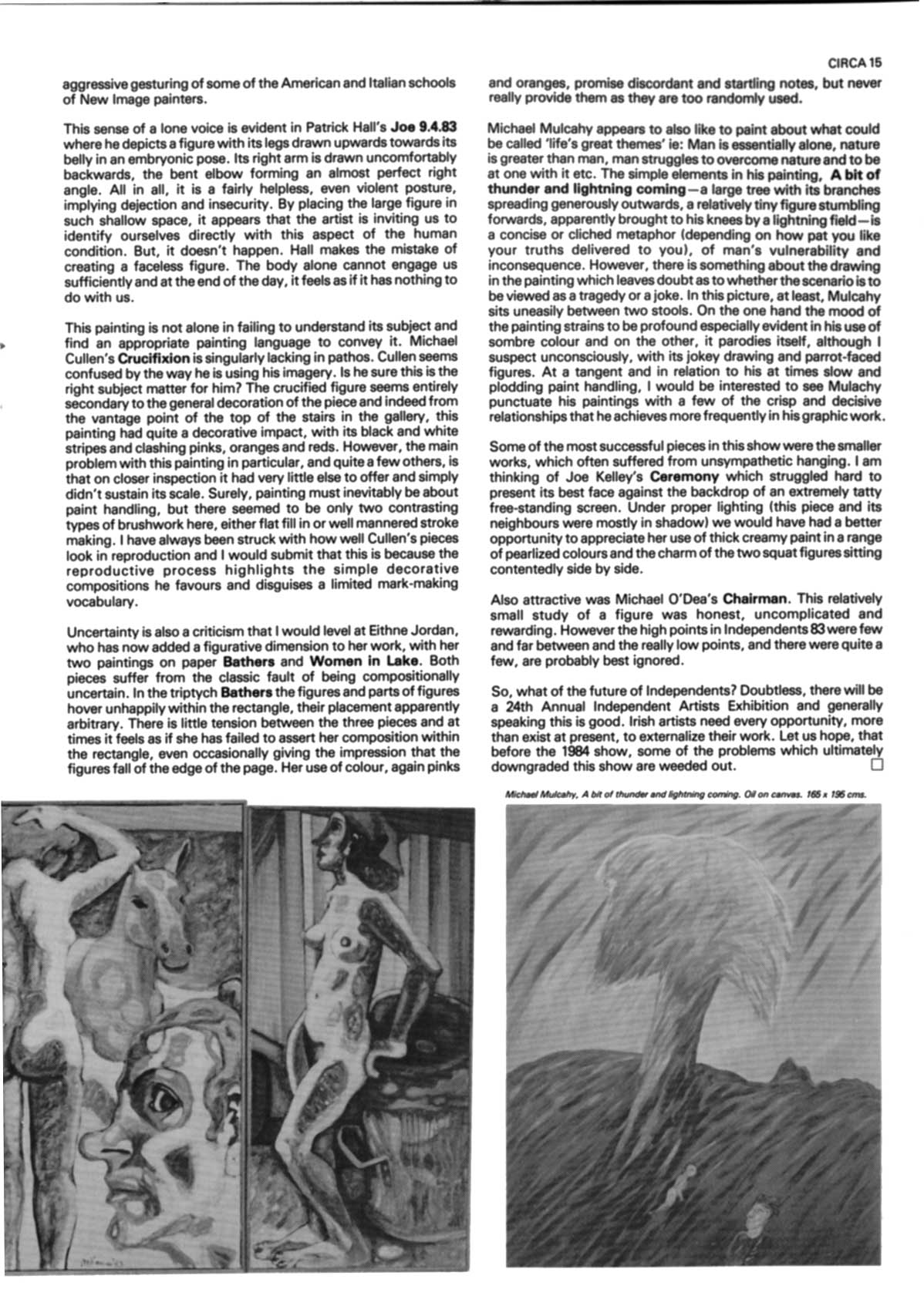 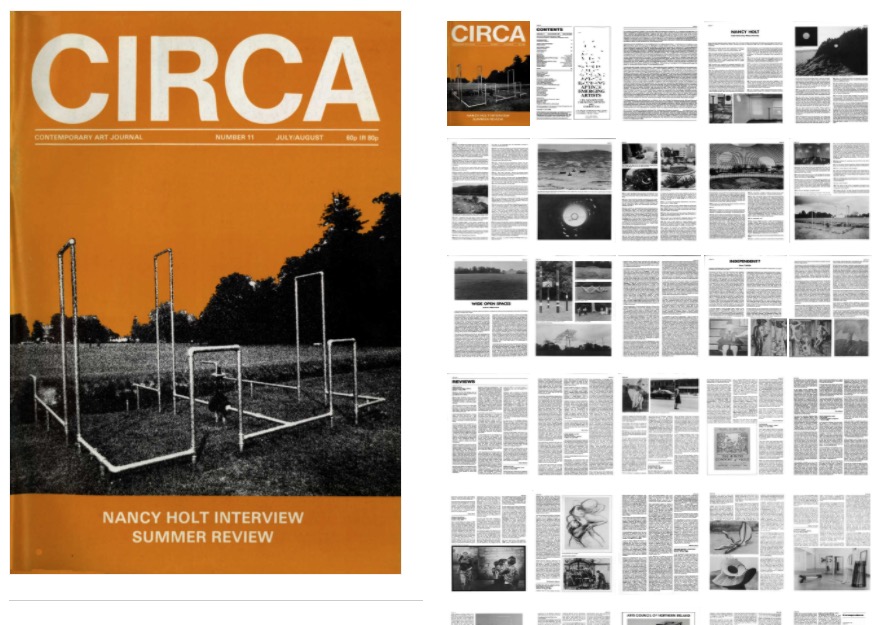 A review of the Independents’ open exhibition in Dublin 23 years on, with a brief examination of the exhibition’s development, its original motivation and the present day reality.

Throughout the history of art there have been many occasions when necessary breaks have been made with the past; the dominant structure. Inevitably a prerequisite for such a break to occur, is that a breakaway group is formed to provide a nucleus of internal support and direction: such ‘deviant’ groups deserve praise, as the courage and energy it takes to seize the initiative is often forgotten in the aftermath and that the resulting thrust and charisma has a ripple effect, which can liberate surrounding artists. Ultimately this allows new ground to be broken, as well as encouraging both new and possibly previously under-exposed work. The practical result of this collective energetic spirit is often increased opportunities such as open group exhibitions. At this stage everything is ideologically correct, the aim is to stimulate a healthy artistic environment, where more rather than less is possible. The point where such a group identity ceases to be beneficial and takes on a dangerous aspect, is when it becomes apparent that the motivating factor is no longer a rigorous search for interesting and worthwhile work, but instead merely a support system to prop up personal dogmas. The Independent Artists Show twenty-three years on reveals that it may be standing on the edge of a precipice, if it hasn’t already fallen off. The ideological claim made by their press release isn’t borne out in this year’s exhibition. “Independent artists came into existence in 1960, when a group of individuals sought to provide an exhibition open to all professional artists working in the 32 counties of Ireland. The committee then as now, prefers to act in an executive rather than a selective capacity, thus overcoming that process which has tended to monitor such bodies as the Royal Hibernian Academy, and the Irish Exhibition of Living Art.”

In the first instance it must be asked, what is meant by the committee acting in an executive capacity rather than a selective capacity? Independents is a selected show and it’s merely rhetoric to pretend that in its present form it is somehow more democratic than those exhibitions it set up in opposition to. In fact, it shares quite a few of the characteristics of those shows, i.e.: the committee get their work exhibited. It would appear that

Independent Artists have only flirted with the idea of taking a swipe at what they perceived as an ‘establishment’ stranglehold, and instead all they’ve done is to replace one hierarchy with another. This belief is further compounded by the almost embarrassingly profound slide tape detailing the history of Independents, which accompanied the show in the Douglas Hyde. Such a pity, that when this group was formed they missed the opportunity to take a real crack at incestuousness, favouritism and misplaced group identities and instead search out examples of good art from whatever quarter. Not to say, there aren’t some good pieces here, but this exhibition reeks of an old-boy network already. Where, as the tape claims, is the revolutionary spirit and the bone in the throat of the establishment?

It is impossible to say with certainty unless we have access to the entire submission, but it would appear that anything that was figurative and in an expressionist vein stood the best chance of being exhibited in this show. Alas, as the exhibition so sadly revealed, there are probably not enough notable exponents of this genre of painting in Ireland to fill the Douglas Hyde Gallery with a worthwhile show. I would not quarrel with an exhibition committee looking for some common threads (once the work is there for selection, not beforehand) in order to make an exhibition hang well together, but, what I cannot accept, is when weak pieces which under any other circumstances would not be allowed to slip through the net, are included simply because they relate to some vague whole. Independents 1983 suffered terribly from this at the expense of the better works and the exhibition in general.

However the irony of it is, that the pieces in this painting show (it is a painting show apart from a few small sculptural pieces) do not look happy together. Perhaps, it is because they nearly all make claims towards some sort of grim-faced individualism — hence titles such as A Soul in Wonder, The Dreamer and Dublin—the lonely ones become interesting — and the collective confidence is not there to allow the hectic posturing or aggressive gesturing of some of the American and Italian schools of New Image painters.

This sense of a lone voice is evident in Patrick Hall’s Joe 9.4.83 where he depicts a figure with its legs drawn upwards towards its belly in an embryonic pose. Its right arm is drawn uncomfortably backwards, the bent elbow forming an almost perfect right angle. All in all, it is a fairly helpless, even violent posture, implying dejection and insecurity. By placing the large figure in such shallow space, it appears that the artist is inviting us to identify ourselves directly with this aspect of the human condition. But, it doesn’t happen. Hall makes the mistake of creating a faceless figure. The body alone cannot engage us sufficiently and at the end of the day, it feels as if it has nothing to do with us.

This painting is not alone in failing to understand its subject and find an appropriate painting language to convey it. Michael Cullen’s Crucifixion is singularly lacking in pathos. Cullen seems confused by the way he is using his imagery. Is he sure this is the right subject matter for him? The crucified figure seems entirely secondary to the general decoration of the piece and indeed from the vantage point of the top of the stairs in the gallery, this painting had quite a decorative impact, with its black and white stripes and clashing pinks, oranges and reds. However, the main problem with this painting in particular, and quite a few others, is that on closer inspection it had very little else to offer and simply didn’t sustain its scale. Surely, painting must inevitably be about paint handling, but there seemed to be only two contrasting types of brushwork here, either flat fill in or well mannered stroke making. I have always been struck with how well Cullen’s pieces look in reproduction and I would submit that this is because the reproductive process highlights the simple decorative compositions he favours and disguises a limited mark-making vocabulary.

Uncertainty is also a criticism that I would level at Eithne Jordan, who has now added a figurative dimension to her work, with her two paintings on paper Bathers and Women in Lake. Both pieces suffer from the classic fault of being compositionally uncertain. In the triptych Bathers the figures and parts of figures hover unhappily within the rectangle, their placement apparently arbitrary. There is little tension between the three pieces and at times it feels as if she has failed to assert her composition within the rectangle, even occasionally giving the impression that the figures fall of the edge of the page. Her use of colour, again pinks  and oranges, promise discordant and startling notes, but never really provide them as they are too randomly used.

Michael Mulcahey appears to also like to paint about what could be called ‘life’s great themes’, i.e.: Man is essentially alone, nature is greater than man, man struggles to overcome nature and to be at one with it, etc. The simple elements in his painting, A bit of thunder and lightning coming – a large tree with its branches spreading generously outwards, a relatively tiny figure stumbling forwards, apparently brought to his knees by a lightning field – is a concise or clichéd metaphor (depending on how pat you like your truths delivered to you) of man’s vulnerability and inconsequence. However, there is something about the drawing in the painting which leaves doubt as to whether the scenario is to be viewed as a tragedy or a joke. In this picture, at least, Mulcahy sits uneasily between two stools. On the one hand the mood of the painting strains to be profound, especially evident in his use of sombre colour and on the other, it parodies itself, although I suspect unconsciously, with its jokey drawing and parrot-faced figures. At a tangent and in relation to his at times slow and plodding paint handling, I would be interested to see Mulachy punctuate his paintings with a few of the crisp and decisive relationships that he achieves more frequently in his graphic work.

Some of the most successful pieces in this show were the smaller works, which often suffered from unsympathetic hanging. I am thinking of Joe Kelley’s Ceremony which struggled hard to present its best face against the backdrop of an extremely tatty free-standing screen. Under proper lighting (this piece and its neighbours were mostly in shadow) we would have had a better opportunity to appreciate her use of thick creamy paint in a range of pearlized colours and the charm of the two squat figures sitting contentedly side by side.

Also attractive was Michael O’Dea’s Chairman. This relatively small study of a figure was honest, uncomplicated and rewarding. However the high points in Independents 83 were few and far between and the really low points, and there were quite a few, are probably best ignored.

So, what of the future of Independents? Doubtless, there will be a 24th Annual Independent Artists Exhibition and generally speaking this is good. Irish artists need every opportunity, more than exist at present, to externalize their work. Let us hope, that before the 1984 show, some of the problems which ultimately downgraded this show are weeded out.